Mobile Video Viewing Expected to Lead the Way in 2013

If you’ve not got mobile in your ad or marketing mix it might be the time to start doing that as eMarketer predicts massive growth in mobile video viewing next year. That means it’s time to really start making sure you’re targeting those mobile devices or you might be missing out on a large section of your audience.

According to eMarketer’s US Digital Media Usage: A Snapshot of 2013, there is expected to be some major growth in video viewing on mobile devices. The trend of larger screens, stronger processors and better, faster mobile data coverage is the cause. That, probably coupled with people starting to replace those older phones with video-capable phones, is what is going to drive the increase.

In the snapshot report they predict some 73.3 million mobile video viewers which breaks down to 22.9% of the US population and 29.6% of mobile phone users. That, they say, is a 19.8% jump over this year. Those viewing video on smartphones are expected to be in the 70.8 million range, up 21.8% from this year. That means the vast majority, 96.6%, of mobile video viewers will have smartphones, and that means you can use that to your advertising and marketing advantage. 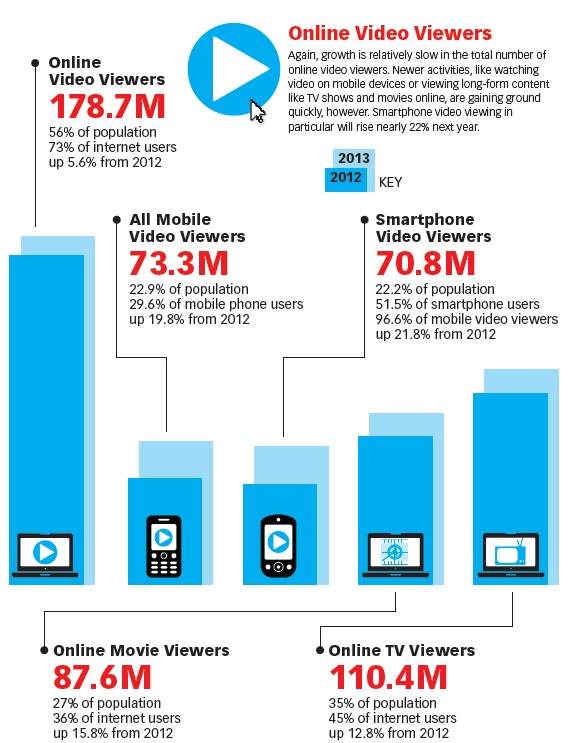 Other notable bumps for next year are in the online TV and movie viewing. Another 12.8% rise means more than one in three Americans will be watching some TV online. Since it was recently reported that video advertising online is a good complement to TV ads and that many are starting to buy those two together, this should help grow the market and drive more dollars into it in the coming year.

The one thing I’m not quite sure about is the low numbers for online video viewers overall. Even though comScore might not have the best definition of a video view, they do have decent tracking on other things and they usually place monthly online video viewers near the 180 million mark. Of course, that’s near critical mass in terms of US Internet users so I don’t expect there to be much growth in the coming months. For the most part, those who are going to watch video online, pretty much already are. There will surely continue to be expansion as younger generations come of age and start watching video online as a common event as opposed to the non-digital generations who are moving into online from TV and remember things like black-and-white only TV and Betamax.

Overall, it looks like a good year coming up for online video viewing regardless of device. Targeting those mobile users will definitely be key to continued advertising and marketing success because they are going to be consuming more and more video views and there are certain things unique to mobile users, for example, they’re mobile and location-based targeting could be vital to converting them to customers, etc. Definitely click the link up at the beginning and check out the rest of the report because there are some other interesting predictions like 189.6 million online shoppers, 80.9 million social gamers and 164.2 million social network users.